Set in a near-future England where the poorest people in the land are forced to sell their children to a travelling circus – to perform at the mercy of hungry lions, sabotaged high wires and a demonic ringmaster. The ruling class visit the circus as an escape from their structured, high-achieving lives – pure entertainment with a bloodthirsty edge. Ben, the teenage son of a draconian government minister, visits the circus for the first time and falls instantly in love with Hoshiko, a young performer. They come from harshly different worlds – but must join together to escape the circus and put an end to its brutal sport.

I have been excited to talk about this book for months! I read Show Stopper book back in February (as part of my WiFi-less Readathon) after receiving an ARC from Scholastic. There are so many brilliant things to say about this book, and I can’t wait to share them all. I am also lucky enough to now own a finished copy of this book as well as an ARC, so I am now holding a giveaway for the ARC on Twitter (there’s more information on that at the bottom of this post)!

This book was so action packed – I was on the edge of my seat the entire time I was reading. It’s the kind of book I can imagine being a really gripping thriller film, the sort that has you peeking through your fingers whilst you watch. I particularly enjoyed Hoshiko’s performance scenes – they were very well written, and got even more intense throughout the book. Also, Show Stopper was super gory – something I was not expecting in the slightest. And although gore isn’t usually my thing, I found that it simply added to the action-packed, suspenseful feel to the book. 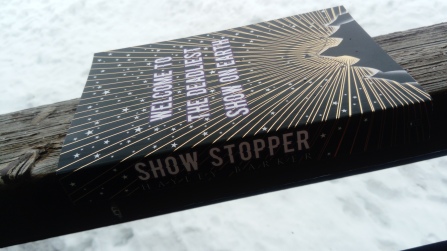 Now, onto character relationships. I will be honest and admit that as a couple, I wasn’t hugely sold on Hoshiko and Ben’s love story. I thought they were both great characters, but this was a case of instalove – a trope I generally do not mind reading, but I feel that amongst everything else happening in the book, there was not much opportunity for them to get to know each other, so their intense feelings for one another didn’t feel very grounded. That said, I really adored Hoshiko and Ben’s loyalty to each other and the other characters. I also loved the close-knit family Hoshiko, Greta and Amina were, and I found their interactions heart-warming. In general, the characters in this book were super emotive. I absolutely despised the ringmaster Silvio, and just like the other characters I adored Greta – which I think is exactly how Hayley wanted the reader to feel!

I thought this book had a really, really important message about discrimination. The scariest aspect of this book was that even though it was so far-fetched at times, it depicted a dystopia that wasn’t so far from the truth. The book was set in Britain, and the entire setting is based off of modern day racism in the UK; eventually, everyone who wasn’t 100% British was pushed to the fringes of society to live in slums, which ultimately led to the Cirque and horrific culture of the time when the book is set. Right from when I first heard about this book I knew this was going to be powerful, and it is exactly the sort of book I think people need to be reading.

This was a really enjoyable read, and definitely a bit different from your average YA novel. At times I found the writing style a little simplistic, but overall I thought the plot was really gripping and easy to follow; I think this is the sort of book that anyone can get into. If you’re a fan of YA, dystopias or thrillers, I would completely recommend giving Show Stopper a go!

#GIVEAWAY! Win this ARC of SHOW STOPPER by @HayleyABarker. Follow and RT to enter, ends 6pm on May 26th. UK only! 🎪🎪 pic.twitter.com/JQMUgch9dG