I’m slightly late with July’s book haul, but I did get some wonderful books last month that I want to share with you. I decided to do this haul separately from my YALC haul (as well as my upcoming classics haul!), as otherwise this would be far too long. I bought and received seven books this month outside of YALC, and I am super happy with all of them!

From one of my local charity shops I bought a copy of The One by John Marrs – this is a book which caught my eye a while ago, so I was pleasantly surprised to find it in the shop. In this book, ‘soulmates’ are found through a gene that only two people share, and as far as I am aware it is more of a thriller than a romance. Either way, this sounds like just my sort of thing, and I cannot wait to read it!

At this charity shop, I also got The Colour of Magic by Terry Pratchett – I bought this following a conversation with a friend of mine about fantasy books. We both are fans of the genre, but I tend to read YA fantasy, so she recommended Terry Pratchett to me. A few days later I was at a charity shop and saw The Colour of Magic, and thought it was the perfect opportunity to try some non-YA fantasy! This is the start of a series set in a place called Discworld, a parallel time and place, and it has been shelved as ‘Humor’ many times on Goodreads, so I’m looking forward to it!

From another charity shop, I bought Hot Milk by Deborah Levy, which is about a young anthropologist trying to find the cause and cure for her mother’s illness, and her attempts lead her and her mother to southern Spain. I mainly bought this book because I’ve heard so much about it, and I have been meaning to read some adult fiction, so this is the sort of book I need. Also, it was 50p, so I couldn’t help myself.

At the same shop (this particular shop has an entire bottom floor full of books; it’s heavenly) I bought Fallen by Lauren Kate, which is a romance story about a girl and a fallen angel who are destined to be kept apart. I’ll be honest, I am expecting this to be so full of clichés that I will find it frustrating to read, so I plan on saving this book for when I feel like a throwback to my trashy-paranormal-romance days. 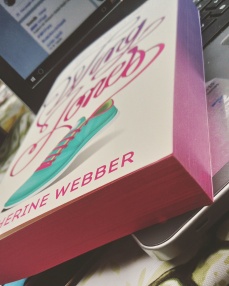 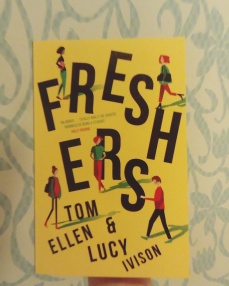 I bought a copy of Wing Jones by Katherine Webber – I read this last month, and have been gushing about it ever since! This is the story of a girl who, following her brother’s accident that has left him in a coma, finds she has a talent for running which changes her life. It is stunning, and not just on the inside – it definitely has the most beautiful edges of all the books I own!

I had a day out in London with a friend of mine, and we visiting the giant Waterstones in Picadilly. Here I bought myself a copy of Freshers by Tom Ellen and Lucy Ivison, which is the story of a boy and a girl, in their first year of university; the main character, Phoebe, has liked Luke for years, but it is only during Freshers that their lives begin to collide (very messily!). I read this before YALC at the end of July, and I loved it!

I also won Amy’s (@ powisamy) Twitter giveaway, and won a copy of The Princess Saves Herself In This One by Amanda Lovelace. I have heard so much about this poetry book recently, and wasn’t sure whether to buy it or not – so I was delighted to win this giveaway! It will be a very quick read, I’m sure, but so far I have loved the poems I’ve read.

I was so pleased with the books I bought in July, I’ve already made a start on them! I was very lucky with my charity shop purchases last month, and I am definitely going to be keeping an eye on those shops in future! Until then -have you read any of these books, and if so what were your thoughts? And did you buy anything exciting to read in July?

7 thoughts on “A Bookish July Haul”