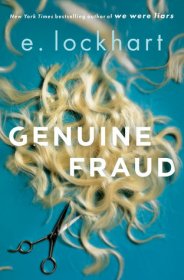 Imogen is a runaway heiress, an orphan, a cook, and a cheat.
Jule is a fighter, a social chameleon, and an athlete.
An intense friendship. A disappearance. A murder, or maybe two.
A bad romance, or maybe three.
Blunt objects, disguises, blood, and chocolate. The American dream, superheroes, spies, and villains.
A girl who refuses to give people what they want from her.
A girl who refuses to be the person she once was.

The hype for this book built up throughout 2017, and having enjoyed We Were Liars and adored The Disreputable History of Frankie Landau-Banks, I was so keen to read Genuine Fraud. Having read both positive and negative reviews, I was slightly apprehensive going in, and unfortunately, I really don’t think this book was for me.

One of the first things I noticed when I started reading Genuine Fraud was that I found the writing style very jarring, in a way I didn’t with the two previous books I have read by E. Lockhart. I eventually warmed to it, and at that point I enjoyed the book far more, but for a large section of the story I felt quite detached. Honestly, I don’t know why I had such a negative reaction to the writing style, having loved it previously – I think that, for me, the ambiguity of the story combined with the vagueness of the writing style just did not work for me.

I found that I could not warm to Jule, the protagonist, at all. Honestly, I’m not sure whether it was intentional (it well might have been), but I found her narrative voice quite irritating and dislikeable, and as a result I found it difficult to root for her. Another small detail that annoyed me throughout was that whilst Jule is frequently described to be incredibly toned and strong, she has quite a poor diet – as in, she either eats hardly anything or chocolate. Of course, there is absolutely nothing wrong with athletes, or people in general, eating chocolate (I personally am a huge lover of chocolate, and eat it frequently). But I know people who are athletes, and they are eating full meals throughout the day just to keep up with their metabolism. So the fact that right near the beginning of the book, Jule simply ate a Snickers bar for lunch (and this continued throughout the book), just didn’t add up to me. I know it is a tiny detail, but it’s one that cropped up enough times for me to mention it. Overall, however, as much as I disliked Jule, in general I think she was a very interesting character, and not one that was meant to be particularly likeable in the first place.

The story in Genuine Fraud takes place backwards, in a way which I think is very clever. Honestly, for the first half of the book, I was very confused, and nothing really clicked, which prevented me from getting into the story. However, once I had caught on to what was really happening, I did start to become a lot more absorbed in the story, and I at the end of each chapter I uncovered something new that changed my perspective on what was happening. If this book had been a little clearer at the beginning, then I think I would have enjoyed the book a lot more, as tbis book was filled with brilliant plot twists that shocked me every time.

For two thirds of this book, I was sure I would be giving it a two star rating, but I definitely did start to enjoy it at the end, and ultimately I thought it was very clever. E. Lockhart is a very clever writer, and I still am looking forward to seeing what she does next. For those of you who are thinking of reading this book, or who are reading it currently, I would recommend that you keep reading, as E. Lockhart does still display her writing genuis.

One thought on “Review – Genuine Fraud”